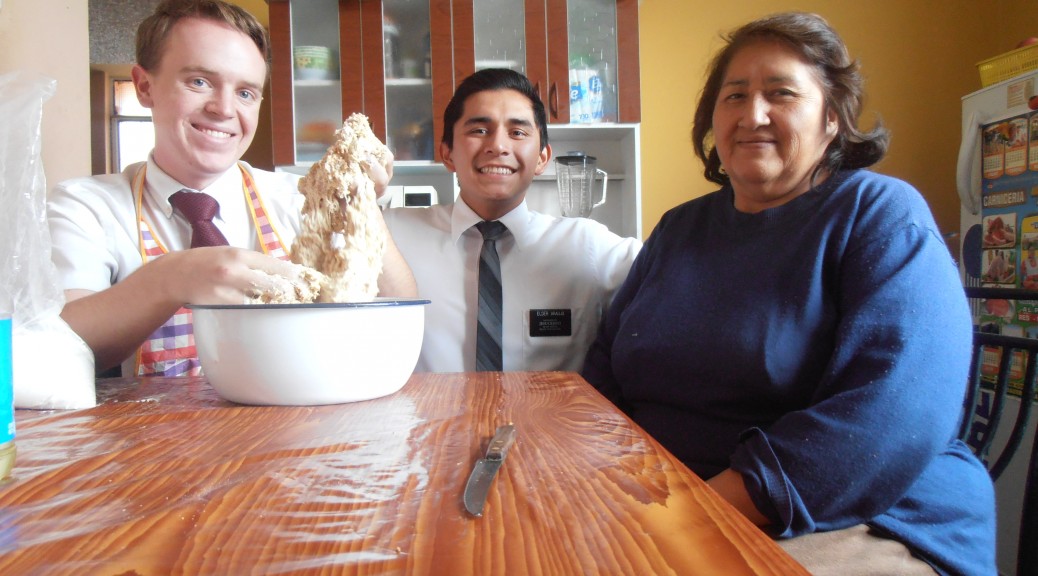 Well as you can guess from the title,
this week was different than normal…

Monday: I fixed a members computer most of the day. Then we visited a
family in my companion’s old area here in Arequipa. Then we taught a family
of old investigators. They seem interested in the message we share. They
were asking us, “Who’s the prophet?”, “How do you guys know that this is
true?” We were answering their questions and left their house a little
late. But an investigator pulled up in his taxi and offered to give us a
free ride home. We got there just on time (before curfew). I love the
tender mercies of the Lord.

Tuesday: We had a really small district meeting today with just 4 people
because there were some emergency transfers with a pair of missionaries.
Then we did divisiones with the Zone Leaders. We were able to give a sick
blessing to a member’s dad who’s in the hospital. That’s always a special
experience.

Wednesday: As it says in the title of this week’s post, I got my yellow
fever vaccine! Don’t worry, Mom. I’m not sick. One of the zone leaders is
finishing his mission next week and wants to go to the jungles of Peru, so
he needed his yellow fever shot. I went with him, and the hospital was
giving them out for free, so I decided to get mine, too. Why not. Just in
case I, too, travel to the jungles of Peru in the future. Then we went to a
birthday party for a member’s son. They gave us cupcakes, cake, and
popcorn. Then another family gave us more cake later that day.

Thursday: We made homemade bread with a less-active member. It turned out
great, even though we baked it at 6,500 ft above sea level. Next time I
think we’re going to make pumpkin chocolate chip bread!

Friday: We did a lot of walking and contacting today. We helped a Sister in
her sewing shop fold and measure fabric. Then we visited the family that
was going to be baptized. They told us they still aren’t ready. That was
sad to hear.

Saturday: We played volleyball in the morning with some investigators and
youth from the ward. It was fun, but I got really burnt on my neck.
Normally my neck is fine because my shirt collar covers it, but I was
wearing a T-shirt… Nobody was home today. But we found a new investigator
that’s been looking for the truth. Our investigator that’s going to be
baptized this Saturday had her baptismal interview. Everything’s great with
her! She’s excited for her baptism. Oh yeah. Before the volleyball game
this morning, we needed to go help the Sister missionaries set up their new
bunk bed. Thanks, again, Uncle Steve for the ChannelLock!

Sunday: Peru had elections again this week. That means there was no Church
again. However, soon we’ll know who will be the new president here. He or
she will become the new president on July 28, 2 days before I’m home. Today
we ate a ton. A family gave us pancakes and omelets. Then we ate a huge
bowl of soup. Then we ate meatballs and mashed potatoes. Then we ate
chicken stuffed with ham, cheese, and bacon, with french fries, soda, and
ice cream. We definitely didn’t eat dinner with the pension today. At the
end of the day, we talk a family of active and less-active members about
the 10 Commandments. It was interesting what they said about the
commandments. They had some incorrect ideas about some of them, mostly due
to the teachings of other Churches. Even though they’re written very
clearly in the Bible, most people still don’t understand them.

And that, my friends, was my week! It’s been good! Time keeps flying by.
Hope everyone’s enjoying summer!